Here are some frequently asked questions about Formula 1. Also reach out to us directly through our Contact Us page.

Q. During a race, when we hear the radio feeds between the driver and his team I will often hear the word "box", what does box mean?

A. More times than not you'll hear "box, box ...........box, box".  When you hear the team saying box to their driver they are telling the driver to come into the pits next time around.  What's becoming more popular with the Mercedes-AMG and Ferrari teams taking the fight to each other is that the strategy of when to come into the pits is sometimes based on whether the other team is going to pit their driver.  For example you may hear box box given to Mercedes-AMG Lewis Hamilton, but the other part of the strategy is to only come in if Ferrari brings their lead car in.  The pit stop in modern Formula 1 races is ultra important, races are won or lost based on what happens with the pit stop.  Occasionally, based on certain circumstances during a race, a team will "double stack" the pit stop meaning that they will bring in both drivers at the same time.  The ability to do this is based on the time interval between their 2 cars.  A well executed double stack is amazing!

Q. What's the big deal about the track at Monaco?

A. The Monaco Grand Prix is one of the older, classic circuits.  The circuit/track in Monaco is considered a city circuit because it actually goes through the city as opposed to being a race track.  At a lot of the city circuits, because the track runs through normal city streets space is often at a premium, the tracks are often narrower making it harder or almost impossible to overtake (pass) another car and you don't have a lot of room for error on either side, usually there is no run off, just retaining walls.

Here's an excellent video that highlights the city track characteristics from 2 of the best ever Ayrton Senna and Nigel Mansell during the last 5 laps of the 1992 Monaco Grand Prix.  Mansell is in 2nd place with a faster car than Senna and Mansell's team calculates that he'll easily catch up to Senna before the race ends, watch what happens:

Q. How do Formula 1 teams move everything from race to race?

A. Either by truck fleet or by air, it depends on where the next race is located.  Here is an excellent detailed overview: The Logistics Behind F1 Q. What does 'team orders' mean? 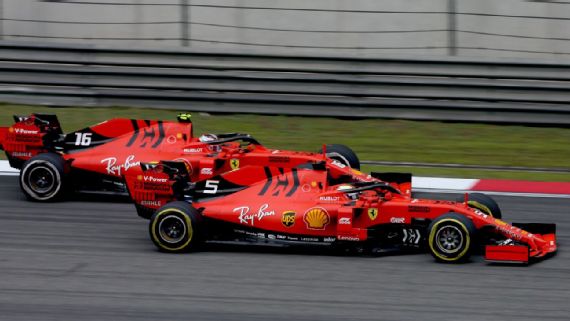 At the 2019 Chinese Formula 1 Grand Prix, Ferrari had their driver Charles Leclerc in 3rd position and their other driver Sebastian Vettel in 4th, at the time, Mercedes AMG Petronas had its drivers running in 1st and 2nd.  Since Vettel, in 4th, was showing that he had more pace than his teammate Leclerc, Ferrari gave the team order for Leclerc to let Vettel pass.

Q. In the last few years there have been, I think, at least 4 or 5 different rubber compounds for the tires and each compound had it's own color, what happened to the rainbow of tire colors (compounds) for the 2019 season?

A. Excellent question.  Apparently, there was some concern that all of the colors were, for some reason, a little confusing, so for this season Pirelli has gone to 3 colors white (hard), yellow (medium) and red (soft), but there are still 5 compounds with internal designations of C1 (hardest) to C5 (softest).  Two of the compounds, C1 and C5, will not have brackets.  As of now, only 3 tire compound choices will be available for races.  In my opinion, the 2019 approach could be more confusing, especially since, for the last few seasons we have become accustom to the rainbow colors that were always easy to differentiate when the cars were on the track at top speed.  Note: For wet conditions, there are still the treaded tires, Intermediates and Full Wets, with their associated colors of green and blue.  (Also see Tires on the Formula 1 for Beginners page.)

Q: The cars from last year were retired, what are the major differences between the 2019 and 2018 cars?

A. Most of the changes to the cars for 2019 vs. 2018 have to do with controlling the airflow differently to create a more competitive race and hopefully allow for more overtaking.  See our News section and the video from the Mercedes AMG Petronas team explaining the differences between Lewis Hamilton's 2018 car and his car for last year. --watch--

Q: How many cars are in a Formula 1 Grand Prix race?